Who has understanding … Revelation 13:18

This calls for wisdom: let the one who has understanding calculate the number of the beast, for it is the number of a man, and his number is 666. (Revelation 13:18 ESV)

I am not sure there are many who can interpret or adequately explain this passage. So many have applied Gematria to the words and tried to come up with a name but I primarily see one of the Cesar’s getting pinpointed. How does that help? None of the Caesars’ are coming back. (Trying to make him come by attributing the wounded head that appeared to be dead and comes back to life to him does not work.)

Of the commentaries I looked at the author was bold enough to say, this one puzzles him.

I believe God has put particular authors and speakers in front of me (you have to be willing to listen) that have given me a sudden clarity about end times events. Since then so much of the Revelation has become clear. Let me get something straight. I have no private interpretation of the bible and, if you noticed, as I write, I typically suggest that you READ for yourself and apply God’s word to some logical thought and see if you do not come to the same conclusions.

One of people who God brought across my path was Walid Shoebat. There is timing involved in revelation for a couple of years ago I would have allowed my prejudice and narrow-mindedness to dissuade me from me considering this man.

I have none of his books. What I found was a recent video. In that video he describes how, as a young believer (he had been a Palestinian terrorist but came to know Jesus Christ) he read this passage an Arabic version in the Codex Vaticanus. When he came to this part “Six hundred threescore and six.G5516 “ χξς chxs; i.e. chi xi sigma, he knew immediately what is was, for this is a common phrase in the middle east among Arabic speaking/Islamics. The phrase is called the Bismillah. “In the name of Allah.”

Mr. Shoebat also stated that Gematria is one the methods that many have used to ascertain the name of the person who is to be the beast, but God is not interested in witchcraft and number games. But allow me this thought for a moment. Did not the wise men from the east (Babylon, trained by those that Daniel trained.) find out by numbers and the stars at what time the Messiah should arrive, and they followed the star that led them right to him. Astronomy was apparently God designed but toying with Astrology was probably not. There is no doubt that God put the 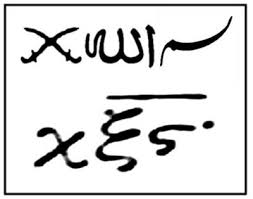 se signs in place for our benefit but they are not to be abused.

The top image is definitely Arabic and shows the cross sword symbols of Islam, the lower text is Greek.

Walid Shoebat stated that he read this in the Codex Vaticanus. The problem with that is that this codex does not contain the Revelation from what I am to understand.

Could the man make a mistake? I do it all the time, partly because my memory is giving way. But he did say he that he read it in his native language, Arabic.

Apply some logic to this:

If Islam is the antithesis to belief in “the One true God” then it makes all the sense in world to tell us that this man can be identified by his relationship to Allah, the god in opposition.

How might God get us to see that? By inserting the Bismallah, something that would not have made any sense to anyone at the time of the writing. Muhammad was not even born until 570 years after Jesus Christ died. It was not until several years later that Mohammedanism was formed.

You might be asking yourself what Satan copied in using the Bismallah. The Bismallah – “in the name of Allah” is basis and theme within Islam that states: “there is no god but Allah, and Muhammad is his messenger.” Did you grasp that? If you wish to convert to Islam this is your statement of faith. You will, if you are a believer, have to understand that there is no one else but God. This is what Jesus told the Jews during the three years of his time among us, but he made it clear, and John, the disciple, conveyed it to us, He was God.

If this has been the defining statement of our belief, there is no Lord but Yahweh, then how would I convey an Antichrist theme? To raise up a religion that claims peace but is in fact the most violent of people on the earth, and instead of acknowledging Jesus Christ as God, they sing the praises of Allah.

If you do not know this Jesus Christ I speak of, then give him your life today. Accept his love for you. He placed himself on a cross to a ransom for your sins so that you are no longer indebted for them. He rose from the dead to give you new life. And he promised to come back for us and take those who await him to live with the Father (God). He loves you and died for you at a time when no one loved him. He did this to prove his love for you. I suggest you run to him because I have asked him to invade your dreams and give you visions of this Jesus Christ. His arms are open awaiting you. Ask him in and give him control of the life that you are not doing so well with.

3 Responses to Who has understanding … Revelation 13:18