The head that was mortally wounded is alive again. Revelation 13:3-4

If you read my last post, you are aware that I defined this head with the mortal wound. I have to assume that most people merely stumble upon my posts, so I will define it once again.

“One of its heads” – Nobody has multiple heads, so we are talking about a governing body or life threatening empire. Merely finding a governing body who has lost a head of state does not do it, because that typically does not end the empires rule.

However Islam resurrected itself in 1979 with the The Iranian Revolution 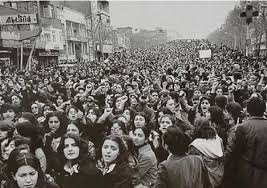 At the beginnings of the Iranian Revolution. Notice – No Burkas.

(also known as the Islamic Revolution or the 1979 Revolution). The 1979 Islamic Revolution refers to events involving the overthrow of the Pahlavi dynasty under Mohammad Reza Shah Pahlavi, who was supported by the United States and its eventual replacement with an Islamic republic under the Grand Ayatollah Ruhollah Khomeini, the leader of the revolution, supported by various leftist and Islamic organizations and Iranian student

So the head that was wounded and “dead” is alive again.

“and the whole earth marveled as they followed the beast”

While there is no doubt that there were followers of Islam since 1924 but we paid them no attention. Many of the nations that the United States has been at war with looked like progressive democracies until Sharia law regained its hold. Apparently progressive democracies allow for personal freedoms, and personal expressions of freedom are banned under sharia law. These extravagances were banned to the point of sending the Middle East back to the dark ages.

Now with that in mind, who is following the beast and why?

Surprisingly, Islam is everywhere, but it is most deeply entrenched in third world nations. Does that have anything to with the hopelessness that runs so deep there, maybe. You also see many Muslim converts coming out of prisons and that can be a fairly hopeless situation.

These nations are under majority Islamic control. Just because your country is not listed does not mean they are not there.

While they may have had plans to infiltrate and overtake the world for a long time, we in the Western world simply ignored it, and now Islam has its hands deeply invested in every major governing body in the world (with perhaps the exception of the governments of Japan and China.)

Since Islam treats women like furniture – unless they are being useful to the cause and blowing themselves up – why would any woman with a brain, follow Islam. It is a death sentence to women, and children.

“they followed the beast.“

The question you need to ask is: who or what, is the beast?

If, as we decided, the beast was a multi-headed governmental entity, with a central core; what is that core? The option that fits best is Islam. But Islam is an ideology, so the central persona that Islam follows and worships is Allah.

Since Allah is a creation of Muhammad’s conversation with probably no more than a demon – a fallen angel – then the beast is a demon disguised as Allah. However, we see the dragon/Satan empowering not only the beast, but men as well.

Within Islam does anyone worship Islam itself? No, they worship Allah. If Allah is a Satanically inspired and empowered demon then doesn’t it make sense to make yourself more marketable by having a spokesman – a mouth. So, this second beast, a man (a spokesman), forces the whole earth to pay homage to the first beast (now, at this point are they going to pay homage to a man, or to Allah?

2 Thessalonians 2:4 ESV (4) who opposes and exalts himself against every so-called god or object of worship, so that he takes his seat in the temple of God, proclaiming himself to be God.

Who then are they paying homage to – or worshiping?

Suppose Princip Erdogan, the President of Turkey, gets his way and is declared the Mahdi,

“And they worshiped the dragon, for he had given his authority to the beast”

Right now there is only one group that intentionally worships Satan, and that is the Satanist church; or at least I thought so.

The word “worship” – proskuneo – is not always, used in a religious sense. It means, properly, “to kiss”; to kiss toward anyone; that is, to kiss his own hand and to extend it toward a person, in token of respect and homage (Robinson, Lexicon).

The IVPBBC says, The praise here offered to the beast mimics a praise often offered to God (Exo_15:11;

In Yahoo answers, someone asked the question, Does the Illuminati worship Satan?

The response is not one I expected:

“Yes and no, it rather depends on your definition of “Satan”. There are 3 different forms of Satanism that is practiced: there’s Theistic Satanism, Atheistic Satanism and the Lucifer Doctrine. Atheistic Satanism is not practiced by the Illuminati, this follows the understanding that there is no divine being, God or Satan, but Satan is just used as symbol for denouncing Christianity, Judaism, and Islam. Under this belief there is no God, there is no devil. The Lucifer Doctrine is the healthy form of Satanism that is learned in the highest degree of Freemasonry. Albert Pike wrote the book “Morals and Dogma”, which is highly reveled in Freemasonry.

In this book, Pike acknowledges Lucifer as the one true god. According to their perspective Adam and Eve were prisoners of God, not through a prison of bars or physical restraints, but mentally. God kept them dumbed down, unaware of their true potential. That’s where Lucifer, the serpent came along and coaxed Eve into feeding from the tree of knowledge. This opened Adam and Eve’s eyes to the concept of Good and Evil. Lucifer saved them and gave them the gift of knowledge. This belief is okay if one chooses to follow it, but as long as they don’t take it a step further, which many Illuminati initiates do.”

That was some weird and twisted thinking, but that is what Satan tends to do. I, however, tend to operate in the black and white. Satan, prior to the fall had the name of Lucifer, but he lost that title and position when he tried to mutiny.

Is it possible that this is describing people who are worshiping the dragon and they do not even know it?

The dragon, whom they cannot see, gave its power to the beast.

Our initial definition of the beast is that of empires, however, the mouthpiece takes on the role and characteristics of a beast as does this second person – the second beast. This is why when people fling out statements such as, no one can understand Revelation, I occasionally respond with, you need to identify which beast you are talking about.

When we say, the dragon gave its power to the beast, we are either talking about the multi-headed entity, or one of several men. Here, in Revelation 13:3-4, I believe the reference is to the first man – the spokesman. He may take on the role of the Mahdi, but initially he is going to come off as smooth, calm and peaceful. That won’t last long.

We will not see this transfer of power, we will only see what seems like a powerful man. With Islam, the assumption is that Allah gives this man the power to do what he does, and I strongly suspect that he is among us now.

“and they worshiped the beast, saying, “Who is like the beast, and who can fight against it?”

“The Quran is clear that there must be “no compulsion in religion” (2:256). Yet Islam is not indifferent to conversion either – Muslims consider their religion to the be the one true religion, and invite people of all races, nationalities and religions to be part of it.” Religionfacts.com – What Muslims believe

This fails to mention that to not convert means death and therefore compulsion. This concept is proven out before us daily in the Middle East.

Muslims believe in one, unique, incomparable God, Who has no son nor partner, and that none has the right to be worshiped but Him alone.

If Islam is the beast and they have the saying, “who can fight against it?”, then what backs that statement and gives it validity?

From Pickthall’s English Translation of the Quran with Commentary

al-Baqarah: The Cow [2.191] And kill them wherever you find them, and drive them out from whence they drove you out, and persecution is severer than slaughter, and do not fight with them at the Sacred Mosque until they fight with you in it, but if they do fight you, then slay them; such is the recompense of the unbelievers.

al-Ma’idah: The Food [5.33] The punishment of those who wage war against Allah and His apostle and strive to make mischief in the land is only this, that they should be murdered or crucified or their hands and their feet should be cut off on opposite sides or they should be imprisoned; this shall be as a disgrace for them in this world, and in the hereafter they shall have a grievous chastisement,

Islam believes all The Jews and Christians:

Whom the Koran calls people of the book, can retain their religion but on the sufferance of accepting humiliation and subjugation to Islam and payment of Jizyah (poll-tax) to the Islamic rulers.

I heard a recent testimony by a converted Muslim, who said the Jizyah tax was 90%. So, even if you survive and they do not outright kill you, they will continue to try to make your life, in their presence, unbearable. I cannot imagine attempting to live on 10% of whatever you scrounge up. The Jizyah tax is no different than extortion or protection money, much like the Mafia collects.

I suppose I make it sound like your only hope is armed retaliation. For the follower of Christ our command is:

“Behold, I send you out as sheep in the midst of wolves; so be shrewd as serpents and innocent as doves. (Matthew 10:16 NASB)

What does that all mean? Pay attention, keep your eyes open, be discreet or thoughtful, and pour yourself out as you mingle with people.

There is no doubt that Jesus is coming soon. Just yesterday 8/23/2015 the news spoke of four more national economies collapsing, a sure sign of the Shemittah.

If you have no confidence that you belong to Christ then give yourself over to Him. The thief on the cross simply said, remember me. You may not be under that kind of duress, so I suggest that you tell him that you are sorry for trying to run things on your own, and invite Him into your to take control.

Jesus said, his yoke is easy. Compared to the one you have been carrying, you know, the one you thought gave you all the control. Jesus gently guides us, and will guide us into his kingdom. And a huge plus, in contrast with Islam, you do not have to blow yourself up to obtain his grace. That was already done and paid for by the Son, Jesus Christ, that bloody day on the cross.

3 Responses to The head that was mortally wounded is alive again. Revelation 13:3-4