You cannot lose your salvation because you are sealed. 2 Corinthians 1:21-22.

Contrary to the religion I grew up in, many have been talking about NOT being able to lose your salvation. The context of this conversation should be obvious, what do you believe, and does it line up with the Word of God? If your beliefs, no matter where they came from, such as the faith movement, do not line up with the Word of God, dump them! While the terminology may not be precise, the idea that we are eternally saved is found in multiple locations throughout the Bible. Here is one of those places.

2 Corinthians 1:21-22 NASB (21) Now He who establishes us with you in Christ and anointed us is God, (22) who also sealed us and gave us the Spirit in our hearts as a pledge.

Here, Paul is doing the talking, and he is referring to a “He”, who establishes us, (“us” here has to be referring to those with Paul and the early church body in Corinth.

To Establish is to confirm, render constant, strengthen, make firm, ratify, or establish by arguments or proofs.

Paul goes on to say, that this “He,” has anointed the believers, the church body.

Anointed, according to the Word Study Dictionary, tells us that “Anointing had the significance of dedication to God;” “Priests were set apart by anointing;” “Kings were designated by anointing, and we see this with David and Saul;” and, “This act was accompanied by the gift of the Spirit. So when David was anointed, the Spirit descended on him and departed from Saul.”

Jumping forward to 2 Corinthians 5, we get this.

2 Corinthians 5:1-6 NASB (1) For we know that if the earthly tent which is our house is torn down, we have a building from God, a house not made with hands, eternal in the heavens. (2) For indeed in this house we groan, longing to be clothed with our dwelling from heaven, (3) inasmuch as we, having put it on, will not be found naked. (4) For indeed while we are in this tent, we groan, being burdened because we do not want to be unclothed but to be clothed, so that what is mortal will be swallowed up by life. (5) Now He who prepared us for this very purpose is God, who gave to us the Spirit as a pledge. (6) Therefore, being always of good courage, and knowing that while we are at home in the body we are absent from the Lord–

The bottom line is that this “He” is God. Never forget that God, the Father, God the Son, and God the Holy Spirit, is one. But pay attention to the fact that God gave us the Spirit as a pledge.

But a pledge of what?

“Therefore, being always of good courage, and knowing that while we are at home in the body we are absent from the Lord–“

2 Corinthians 1:22 NASB (22) who also sealed us and gave us the Spirit in our hearts as a pledge.

Sealed is the Greek word sphragizo which means to seal, or stamp with a seal for the purpose of finalizing or to close up a transaction.

According to the Word Study Dictionary sealed also implies:

Jesus made the final payment on our behalf and God closed the books, indicating ownership when we accepted that Jesus died and rose again for us. At this point, God sealed us, and He did it with the Holy Spirit. The Holy Spirit is that mark upon our lives.

And note how 2 Corinthians 1:22 tells us that the Holy Spirit is in our hearts as a mark of God’s pledge.

When did that happen?

On the day you accepted Him.

How do you come to Jesus?

1 Corinthians 15:1-4 NASB (1) Now I make known to you, brethren, the gospel which I preached to you, which also you received, in which also you stand, (2) by which also you are saved, if you hold fast the word which I preached to you unless you believed in vain. (3) For I delivered to you as of first importance what I also received, that Christ died for our sins according to the Scriptures, (4) and that He was buried, and that He was raised on the third day according to the Scriptures,

That Gospel is simply this. Christ died for our sins according to the scriptures. He was buried, dead, and raised again, to life, on the third day by the Father. Romans 1:16-17 tells us that this gospel is the power of God for salvation to everyone who believes, to the Jew first and also to the Greek. And that we continue to live in this salvation through faith. 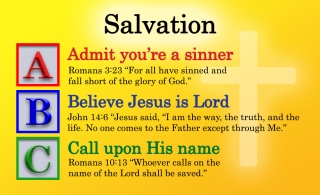 Jesus, I admit that I am broken and I need a savior. I understand that you died for me so that I could live eternally, with the Father, in heaven. I have nothing to offer you but my life and so I give that to you now. Thank you for forgiving my sins and accepting me into your kingdom.

1 Response to You cannot lose your salvation because you are sealed. 2 Corinthians 1:21-22.