As if the first beast was not bad enough. Revelation 13:11

This aspect of Revelation intrigues me more than some of the others, because of the similarities in terms of the signs that the two witnesses perform, and how this second beast parallels our Messiah in description. The potential for deception is huge.

Then I saw another beast coming up out of the earth; and he had two horns like a lamb and he spoke as a dragon. He exercises all the authority of the first beast in his presence. And he makes the earth and those who dwell in it to worship the first beast, whose fatal wound was healed. He performs great signs, so that he even makes fire come down out of heaven to the earth in the presence of men. And he deceives those who dwell on the earth because of the signs which it was given him to perform in the presence of the beast, telling those who dwell on the earth to make an image to the beast who *had the wound of the sword and has come to life. And it was given to him to give breath to the image of the beast, so that the image of the beast would even speak and cause as many as do not worship the image of the beast to be killed. And he causes all, the small and the great, and the rich and the poor, and the free men and the slaves, to be given a mark on their right hand or on their forehead, and he provides that no one will be able to buy or to sell, except the one who has the mark, either the name of the beast or the number of his name. Here is wisdom. Let him who has understanding calculate the number of the beast, for the number is that of a man; and his number is six hundred and sixty-six.

My favorite part, tearing it up.

And I beheld another beast coming up out of the earth; and he had two horns like a lamb, and he spake as a dragon. (Revelation 13:11 KJV)

As if the first beast was not bad enough.

Is where the second beast comes from significant?

The word earth is gē and means soil; by extension a region. The same word was used in Revelation 13:3 and there it was defined as the world. But what else do we have to understand it?

The word was translated earth here in John 3:31:

Jesus used the word and Matthew called it a region:

Matthew 4:16 KJV The people which sat in darkness saw great light; and to them which sat in the region and shadow of death light is sprung up.

Was there a region where the sun did not shine?

No, so it was an analogy for an area. In this case he is probably talking about the nations (I would have used the phrase gentile nations but we seem to associate gentile with Christian and one does not equal the other.)

Allow me to back up this concept of the region pointing to the nations:

And leaving Nazareth, he came and dwelt in Capernaum, which is upon the sea coast, in the borders of Zabulon and Nephthalim: That it might be fulfilled which was spoken by Esaias the prophet, saying, The land of Zabulon, and the land of Nephthalim, by the way of the sea, beyond Jordan, Galilee of the Gentiles; The people which sat in darkness saw great light; and to them which sat in the region and shadow of death light is sprung up. (Matthew 4:13-16 KJV)

What gentiles still are – are those without a relationship with Christ.

Can I admit something to you? God has really been working me over for several years now, as I was raised to be horribly judgmental. What that means is that I tended to give mercy only to those that did it according to my religious training. But there was that day when God showed me Matthew 25 where he, in the person of Jesus, calls the dead – those that remain in the ground from the nations/gentiles. He separates them into sheep and goats and invites the sheep into the kingdom. That took me some time to absorb, but I got it; and what I got is an understanding of God’s mercy that far surpassed anything I had ever understood. I still have my moments and must be reminded that God is merciful, and that I do not have anything mastered yet, but I am working on it.

Revelation 13:11 MSG I saw another Beast rising out of the ground. It had two horns like a lamb but sounded like a dragon when it spoke. 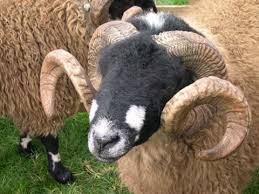 We city folk don’t think about sheep as having horns, but they do. Farmers cut them off because they want to sell an undamaged hide eventually, but in John’s day, that did not happen.

We should have an imagery that sounds similar to Revelation 13:11.

One of the Elders said, “Don’t weep. Look–the Lion from Tribe Judah, the Root of David’s Tree, has conquered. He can open the scroll, can rip through the seven seals.” So I looked, and there, surrounded by Throne, Animals, and Elders, was a Lamb, slaughtered but standing tall. Seven horns he had, and seven eyes, the Seven Spirits of God sent into all the earth. (Revelation 5:5-6 MSG)

This is surprising, as the elders said, “ Don’t weep. Look–the Lion from Tribe Judah, the Root of David’s Tree, has conquered. He can open the scroll, can rip through the seven seals.” So I looked, and there, surrounded by Throne, Animals, and Elders, was a Lamb, slaughtered but standing tall..”

There are many descriptions of Jesus voice when he speaks, such as, the voice of many 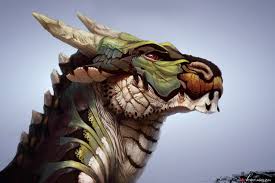 waters, but there are none in which he sounds like a dragon. (We already know that the dragon – the deceiver – is Satan.)

Now the serpent was more crafty than any other beast of the field that the LORD God had made. He said to the woman, “Did God actually say, ‘You shall not eat of any tree in the garden’?” (Genesis 3:1 ESV)

The King James version of Genesis 3:1 calls him subtile. Subtile is the Hebrew word cunning. To have the second beast speaking like a dragon tells us that he is to be not only crafty, but subtile.

We have not made it that far in our study of Revelation but chapter 16:13 attests to what comes out of the mouth of: the first beast, the second beast/false prophet, and the dragon/Satan – unclean spirits.

As you read this you should have huge red flags popping up. This is NOT Jesus the Christ. If not, then who is this person? In our spirits we see the lamb, Jesus Christ as John describes what he sees in Revelation 5, but this is definitely not the Jesus we know. One of the things that makes prophecy so special is the people who have taken the time to understand and pay attention to what Islam believes, then share that with us, like Joel Richardson does in his books, The Islamic Antichrist, and The Mideast Beast. I also found information by Dr. Mark Durie, and I give it to you here.

Islam too is awaiting their version of Jesus. They call him Isa:

From – ‘Isa, the Muslim Jesus – By Dr Mark Durie

The Qur’an tells us:

‘Isa, was a prophet of Islam’

“Jesus’ true name, according to the Qur’an, was ‘Isa. His message was pure Islam, surrender to Allah. (Âl ‘Imran 3:84) Like all the Muslim prophets before him, and like Muhammad after him, ‘Isa was a lawgiver, and Christians should submit to his law. (Âl ‘Imran 3:50; Al-Ma’idah 5:48) ‘Isa’s original disciples were also true Muslims, for they said ‘We believe. Bear witness that we have surrendered. We are Muslims.’ (Al-Ma’idah 5:111)”

So, to some small degree, Islam gets the genealogy correct, Jesus is born of Mary. But this guy is not Jesus.

Exodus 6:20 NASB Amram married his father’s sister Jochebed, and she bore him Aaron and Moses; and the length of Amram’s life was one hundred and thirty-seven years.

Born of Mary, but not of God, this Isa, is of the same lineage as Aaron and Moses. That, according to their beliefs, makes him eligible to be a priest. There may be some truth to this which will lend to the deception. Not wanting to jump ahead but this last aspect plays well into what we see in scripture. I opened this blog with a comment about the parallels between Jesus and Isa – the false prophet.

“To aid in his ministry to the Jewish people, Jesus was given the ability to perform miracles (such as healing various ailments like blindness, raising the dead to life, casting out demons, etc.) which no other prophet in Islam has ever been credited with, all according to God’s will.”

Revelation 13:13, 14 It performs great signs, even making fire come down from heaven to earth in front of people, and by the signs that it is allowed to work in the presence of the beast it deceives those who dwell on earth, telling them to make an image for the beast that was wounded by the sword and yet lived.

“Like all prophets in Islam, Jesus (Isa) is considered a Muslim (i.e., one who submits to the will of God), as he preached that his followers should adopt the “straight path” as commanded by God. Traditionally, Islam teaches the rejection of the Trinitarian Christian view that Jesus was God incarnate or the son of God. The Quran says that Jesus himself never claimed to be the Son of God, and it furthermore indicates that Jesus will deny having ever claimed divinity at the Last Judgment, and God will vindicate him. Islamic texts forbid the association of partners with God, emphasizing a strict notion of monotheism(tawhīd).”

“Numerous titles are given to Jesus in the Quran and in Islamic literature, the most common being al-Masīḥ (“the Messiah”). Jesus is also, at times, called “Seal of the Israelite Prophets”, because, in general Muslim belief, Jesus was the last prophet sent by God to guide the Children of Israel. Jesus is traditionally understood in Islam to have been a precursor to Muhammad, and is believed by Muslims to have foretold the latter’s coming;”

The short of it:

The Jesus Islam looks for is named Isa. He will be a Jew, of the lineage of Aaron, and a priest. He will perform miracles, and he will be a Muslim. The scariest aspect of this, is that he may be in training to be a high priest within the new temple. Considering how he will set up the image of the beast and make it talk. Doesn’t that imply that he has access to the temple and the respect of his peers – at least for a time. He will cause many to be deceived. If he has this much power, what is to say that many Jews will not give up their faith and convert to Islam.

How do you avoid being deceived? You know what the original is like. Part of that process is to be intentional in having a personal relationship with Jesus Christ. It starts with you asking Jesus Christ into your life. After that you go on a quest to find out what his nature is and how He would respond to people. You would then know what he sounds like and how he responds when you talk to him. You will find that he is crazy passionate about you and can hardly wait to throw his arms around you.