“and all who dwell on earth will worship it, everyone whose name has not been written before the foundation of the world in the book of life of the Lamb who was slain.” (Revelation 13:8 ESV)

“and all who dwell on earth will worship it,..”

Is that a true statement? No!

How do I know that? Because the sentence continues:

world in the book of life of the Lamb who was slain.”

So this applies to:

I know what you are thinking, as I did it myself, that momentary thought that says after the rapture people have no hope. God never gives up hope, and those whose names are written in the book of life, the ones you cannot imagine ever turning their hearts, will continue to come up to the last-minute.

You surely understand Islam’s goal to form a Caliphate by now.

Surprisingly, I constantly meet people who have no idea. 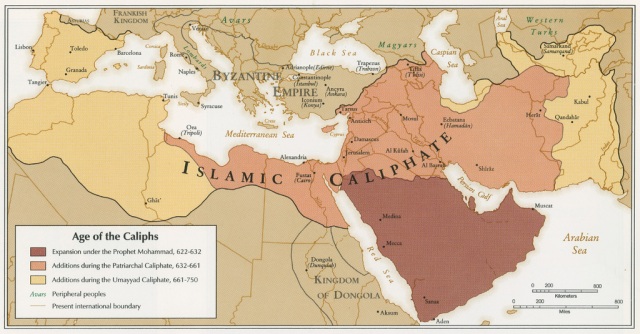 Territories of the Caliphs

A caliphate is the Islamic form of government representing the political unity and leadership of the Muslim world. The head of state (Caliph) has a position based on the notion of a successor to Muhammad’s political authority. The most recent caliphate was the Ottoman empire, however it was brought to its knees in 1924.

There was a time when they were not so open about this goal – The ultimate goal of the Caliphate would be to bring every square inch of this planet under Islam and convert/subdue all remaining Infidels.

The goal of the Caliphate

Anyone outside of Islam is considered an infidel, and therefore subject to any abuse they consider fit under Sharia law. This includes: stoning, chopping, sawing, hanging, raping, electrocuting, shooting, burning alive, and throwing people off buildings. Did I miss anything?

Many like to advocate that the Roman empire is where the Antichrist will come from, I would like to point out that the Ottoman empire held a comparable amount of land as well.

Roman empire at its height.

Now contrast this map with the Ottoman empire at its height.

Ottoman empire at its strongest

I want to point out one other thing – terminology.

“and all who dwell on earth will worship it, everyone whose name has not been written before the foundation of the world in the book of life of the Lamb who was slain.” (Revelation 13:8 ESV)

I suppose at some point we need to standardize our translations. The problem there is deciding who is the most correct. That is why I compare constantly and look to the Greek or Hebrew, and the context.

As you can see, the ESV says they worship “it”. That is very proper for something so nondescript as an aspect of a multi-headed beast. One which we have established as empires or governing bodies for the heads. But this “it” has been taken one step farther in that it was given a mouth. That mouth seems to direct the action at this point and is therefore perceived as the power source. How quickly we forget that the dragon gave the beast its power. Yes, I see the implications that the mouth carries that power, but no greater than our own American Secretary of State might.

All inhabitants of the earth will worship the beast–all whose names have not been written in the Lamb’s book of life, the Lamb who was slain from the creation of the world. (Revelation 13:8 NIV)

While the ASV declares this beast to be an him.

And all that dwell on the earth shall worship him, every one whose name hath not been written from the foundation of the world in the book of life of the Lamb that hath been slain. (Revelation 13:8 ASV)

It is obvious that the beast becomes a worldwide ruler. This aspect of the beast has many names. In Daniel he is the willful king:

“And the king shall do as he wills. He shall exalt himself and magnify himself above every god, and shall speak astonishing things against the God of gods. He shall prosper till the indignation is accomplished; for what is decreed shall be done. (Daniel 11:36 ESV)

In Daniel chapter seven, he is known as the little horn:

I considered the horns, and behold, there came up among them another horn, a little one, before which three of the first horns were plucked up by the roots. And behold, in this horn were eyes like the eyes of a man, and a mouth speaking great things. (Daniel 7:8 ESV)

This person is called the prince that is to come in Daniel chapter nine:

And after the sixty-two weeks, an anointed one shall be cut off and shall have nothing. And the people of the prince who is to come shall destroy the city and the sanctuary. Its end shall come with a flood, and to the end there shall be war. Desolations are decreed. (Daniel 9:26 ESV)

I think I ended on Daniel for a reason. So many are looking for this “prince” to come from Rome seeing as the troops operated under the Roman flag, under a Roman emperor, and they fulfilled the prophecy by destroying Jerusalem and the temple (This was also foretelling a future event.) The problem with the belief that we should be looking for someone to come out of Rome ignores historical evidence, for not only Josephus, but Tacitus also recorded that the troops were primarily conscript Assyrian troops, with a vile hatred of the Jews. They set fire to the wood lined temple. Titus the emperor was alerted and he came running in trying to stop it. They ignored his orders, knowing the potential repercussions.

If Titus was against the destruction of the temple, how can we say that he was the prince? We cannot. But because Assyrians, the lifelong enemy of Israel, destroyed the temple and the city, would it not make more sense to understand that this prince then, would come from Assyria. Assyria was Nineveh and Elam, known today as Iran and Iraq. Those nations are now represented by almost any nation where Islam is practiced.

Where then is this prince coming from?

2 Responses to “and all who dwell on earth will worship it,..” Revelation 13:8