“ It (the false prophet – also referred to as a beast) causes all, both small and great, both rich and poor, both free and slave, to be marked on the right hand or the forehead, so that no one can buy or sell unless he has the mark, that is, the name of the beast or the number of its name.” Revelation 13:16-17 (Emphasis mine)

If you think about how Islam deals with infidels, they are not that high-tech, are they?

I say that because, for the longest time, we were subjected to watching the beheading of Isis captives and an American citizen like Nick Berg – who was an American freelance radio tower repairman who went to Iraq after the United States invasion of Iraq. He was taken hostage and eventually beheaded on public television. Others have been shot in the head, and some have been hanged in public squares.

I have been watching how Islam treats people for several years now and decided to do a little research to see if the Quran prescribed the sword as the unique method of death for infidels. I can’t say that I found that directive, but it is clear killing infidels is communicated.

If you attempt to research this for yourself, you will find the obligatory rebuttals to these passages from the Quran. In their rebuttals, they will tell you that Muslims are only to kill if attacked. It would seem that even an oral statement, especially one like this, in which my statements could be deemed blasphemy against Allah, constitutes an attack. Oh yes, the Quran tells them that deception is an elevated form of Jihad; and from what I understand, Allah is openly stated as the greatest of deceivers. So take that for what is worth. So, when they stand in defense of orders to kill, we might need to perceive what they say as nothing more than an attempt at deception.

While the next few lines may not speak to the method of death, it does speak to how serious they are about killing you.

“SO, LET’S LOOK AT WHERE THE KORAN SAYS TO KILL INFIDELS AND THEN THE FACT THAT THE BIBLE DOES NOT TEACH THE SAME.”

1. The Koran says to kill infidels.

Note: an “infidel” means “a person who does not believe in religion or who adheres to a religion other than one’s own.”
Synonyms are unbeliever, agnostic, atheist, pagan, idolater, and heretic.

Here are passages from the Koran that teach Muslims to kill infidels (note: a sura is like a chapter reference):

“But when the forbidden months are past, then fight and slay the pagans wherever ye find them, and seize them, beleaguer them, and lie in wait for them in every stratagem [of war]; but if they repent, and establish regular prayers and practice regular charity, then open the way for them: for God is Oft-forgiving, Most Merciful” (Sura 9:5).

“Fight those who believe not in God nor the Last Day, nor hold that forbidden which hath been forbidden by God and His Apostle, nor acknowledge the religion of Truth, [even if they are] of the People of the Book [Christians and Jews], until they pay the jizya [tribute] with willing submission, and feel themselves subdued” (Sura 9:29).

“Prophet! Make war on the unbelievers and the hypocrites and deal sternly with them. Hell shall be their home, evil their fate.” (Sura 66:9)

When the Lord inspired the angels (saying) I am with you. So make those who believe stand firm. I will throw fear into the hearts of those who disbelieve. Then smite the necks and smite of them each finger. (8:12)

Now when ye meet in battle those who disbelieve, then it is smiting of the necks until, when ye have routed them, making fast of bonds; and afterward either grace or ransom ’til the war lay down its burdens. (47:4)

There is much more than this, but I am trying not to bore you.

This idea that outsiders cannot work freely in an Islamic-controlled land is not a new concept.

Look at what the Qur’an says:

“Fight those who believe not in Allah nor the Last Day, nor hold that forbidden which hath been forbidden by Allah and His Messenger, nor acknowledge the religion of Truth, (even if they are) of the People of the Book, until they pay the Jizya with willing submission, and feel themselves subdued.” Qur’an (9:29)

So, if you submit or are subdued and pay the Jizya tax, then you can live in relative freedom; otherwise, no.

Having been told by a “brother” at church that he was NOT interested in extra-biblical literature, and I have shoved a good deal of this type of literature down your throat, then let me show how this applies and aligns itself with scripture.

“And he (He is the false prophet. Islam believes this to be their version of Jesus, and they believe that he will be of the lineage of Aaron and, therefore, entitled to be the high priest in the Jewish temple.) causes all, the small and the great, and the rich and the poor, and the free men and the slaves (With the arrival of the vaccines do you believe that people like Bill Gates had that deadly concoction injected in their bodies? Of course not, after all, they have to run this great reset, that Klaus Schwab refers to as the fourth industrial revolution where humans become bio machines due to the ingredients in the vaccinations and further upgrades,) to be given a mark on their right hand or on their forehead, and he provides that no one will be able to buy or to sell, except the one who has the mark, either the name of the beast or the number of his name.”
(Revelation 13:16-17 NASB) (Emphasis mine)

I never would have guessed that even the great and rich will have to comply. 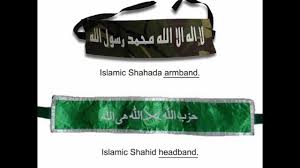 But what if this mark is not that high-tech, and Islam, who may have control at this point, may have their own simple idea of a mark.

The Jews, forced into the ghettos of Poland, were given marks, and they were not allowed to do

A crowd marked as Jews

anything without the yellow star that said Juden on them. Few realize that there were many colors used to denigrate people groups under the direction of the Nazis.

A puzzling aspect of this prophetic word is the reference to this 666 indicator and how it is the number of a man. For a moment, I thought Walid Shoebat sounded good, as he described how it looked like the Arabic symbols meaning there is no god but Allah, and Muhammad is his messenger. I am not sure, and I am not willing to play with Gematria. So if there is one thing in Revelation that throws me for a loop,

it is this 666 stuff. We already know it is a man; I am confident that it will be someone fulfilling the role of the Mahdi; they will head the restored Islamic caliphate, but who it is, is anybody’s guess. For a few minutes, I thought Principe Erdoğan of Turkey was going to take the lead in this role, but I now lean toward former President Barack Obama. We should not rule him out.

“This calls for wisdom: let the one who has understanding calculate the number of the beast, for it is the number of a man, and his number is 666.”

Contextually, John had just finished speaking about the image of the beast being set up, but as I said, we have too many options to define this as yet.

Your best bet is to stay ready on God’s side. Start by having a personal relationship with Jesus Christ. You do that by turning your life over to Him and asking Him to come to be the center of your life. Then work on trimming off the bad fruit you have grown. Jesus Christ knows how to do that.