How can we know when we are close to the end? Chapter two.

Does God have a seven-year period, or is this just man’s idea?

God has given us a multitude of examples that prove that He is deeply invested in the number seven. Creation happened within six yoms of time, and then God rested on the seventh, why God would be exhausted, especially if He was merely speaking things into existence, but none-the-less, he rested.

The word rested is shabath. We also find it spelled shabbath, and sabbath. It also carries the meanings to cease and desist. Therefore we could just as easily say, that on the seventh day, God ceased from creating. I suppose it is much like an artist, who at some point looks at what they have painted and says, it is good, and therefore stops the creative process.

I inserted the Hebrew word Yom instead of days, because the word that we choose to define as a day can actually mean: a space of time defined by an associated term, it is often used adverbially as age. Oh sure, there were other words used prompting our choice to limit God to a twenty-four hour period of time, like heat, cold, and lights to govern the day and night, but this idea of God only working because it is daylight, tends to fall apart if you are holding to a precise chronology in the creation of earth. You see, the Sun is not made, nor placed in the sky until the fourth day, after these conversations about lights to govern the day, and heat and cold.

This idea of time is one of those where you scratch your head as you: try to date the earth; attempt to figure out how the dinosaurs fit into creation, or wonder how long Adam walked this earth alone. And though it is not directly time related, there are those who bravely ask, where did Cain get his wife. Obviously, there are things in scripture that can keep you up at night.

I cannot find a single decree in the New Testament where God has stated that there would be seven years of wrath coming upon the earth.

Oh, don’t get me wrong wrath is coming, but I cannot say it holds to a definite time frame.

Do a word search for wrath, and you will find that a time frame is not specified, however, if you do a search for the word seven you will find 326 verses in the Old Testament alone. The number seven is significant because we, by association, can find allusions to end time eschatology in stories such as the one in which Joseph interprets the dream for Pharaoh, where he saw the fat and skinny cows.

Genesis 41:30 ESV “but after them there will arise seven years of famine, and all the plenty will be forgotten in the land of Egypt. The famine will consume the land,”

The symbology in this could easily parallel what we see in end times eschatology. While I will not exclude famine from God’s scenario, the unequaled death and destruction might be analogous to the famine that consumes the land in a seven-year period.

We do have something rather definitive in terminology, when we come to this person we see in Daniel 9, as “he makes a strong covenant with many for one week.” With some help from scripture and commentaries, we find out that “one week” represents a seven-year period.

Daniel 9:27 ESV And he shall make a strong covenant with many for one week, and for half of the week he shall put an end to sacrifice and offering. And on the wing of abominations shall come one who makes desolate, until the decreed end is poured out on the desolator.”

The covenant or treaty, is made by this person, and it is broken by him. We are making a huge assumption if we think that God has to honor the time period described in Daniel 9:27. While the time period, and the person setting it up, play well into God’s scheme of things, it seems to come out of the man’s mouth.

Proverbs 16:9 ESV The heart of man plans his way, but the LORD establishes his steps.

Proverbs 16:9 GNB You may make your plans, but God directs your actions.

“He” has many names.

Robertson’s Word Pictures helps to define what we see in Matthew 21:9, and tells us that in declaring: “Hosanna to the Son of David (Hosanna tōi huiōi Daueid). “They were now proclaiming Jesus as the Messiah and he let them do it.”

“he shall make a strong covenant with many for one week,”

We make the assumption that this treaty is made with Israel, however this says nothing about Israel. It does say many. While it would be nice if Israel was included, there is nothing here that implies that.

Do we have a guarantee that this period of time is purely chronological? Not necessarily.

God certainly has a time frame, but He is the one that is keeping the clock. We find an example of this in Daniel 9:24. It seems that all of time has been put on hold, and now we are stuck between the 69th and 70th week, for over 2000 years.

Daniel 9:24 ESV “Seventy weeks are decreed about your people and your holy city, to finish the transgression, to put an end to sin, and to atone for iniquity, to bring in everlasting righteousness, to seal both vision and prophet, and to anoint a most holy place.

What many of us do not comprehend it that this book we read, the Bible, is a Jewish book. It was written with a Middle Eastern mindset, therefore the phrase seventy weeks would have an immediate recognition to the Jewish readers. It carries the significance of the shemitah, a seven-year period which finishes with a time of releasing Jewish debtors from their debts. It is quite possible that we are in what is known as the Jubilee year; the period of time which is considered the grandest of them all, when all things are made right, and their land is restored to them again. Seventy weeks then, is really 70×7, or 490 years.

490 years have come and gone, and yet the most telling aspects of this prophecy over Jerusalem are the aspects about anointing a most holy place, and the destruction of the city and the temple. If the holy place is the rebuilt third temple in Jerusalem, has that happened yet?

[Many would argue that the prophecy about the temple was fulfilled when, as most will say, Titus Vespasian destroyed the temple in 70 A.D. Since he was the Roman emperor over Jerusalem, then the troops who destroyed the temple would be Roman troops, or as some presume, Italians. This presumption has caused us to look to Europe to bring forth not only the Antichrist, but the people who will destroy the last temple and Jerusalem. The problem with that thinking is that we ignore recorded history, for both Josephus and Tacitus recorded that the greater percentage of troops, fighting under the Roman banner, were conscripts from nearby conquered nations, in this case Assyrian. The Assyrians had an aggressive hatred of the Jews, and openly expressed their desire to destroy Israel and it’s people. It was then the Assyrians who sacked the temple, ignoring direct orders from Titus to cease. Having this information, it is much easier to see that the people of the prince will be Assyrian, or Middle Eastern, and an event that is yet to come.]

I will present you the evidence available and let you decide for yourselves.

And yes, I have looked up the occurrences of the words: wrath; week, and weeks; 1260; combinations of 42 months; seven, and tribulation, and I find nothing in the New Testament that shows me God specifying that He will pour out his wrath for this period of time.

Chronologically this is what we have: 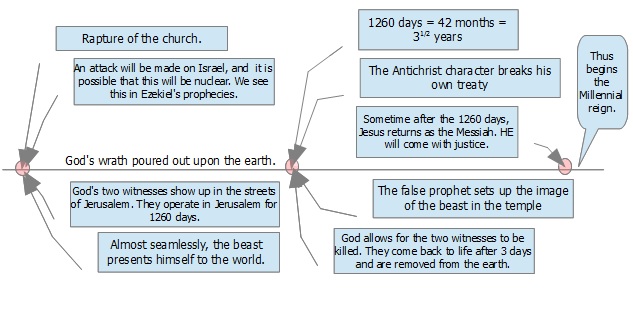 There is one other possibility we need to entertain.

We are told by the writer of Hebrews that Jesus, as a high priest, entered the holy place in heaven, the pattern for things down here on earth, and splashed his blood – the blood of a sacrificial lamb on the heavenly altar and utensils, anointing them. You can see this in Hebrews 9:11-24.

Ephesians 1:7 ISV In union with him we have redemption through his blood, the forgiveness of our offenses, according to the riches of God’s grace

This alone should have been the end of transgression, however, every human on the earth does things outside of God’s will, continually. It almost seems as though the sin is built into us.

As you read Daniel 9:24 you see transgression finished, an end of sin. Look around you; has that happened? Not in the physical world. Violence is increasing, as is the coldness of men’s hearts. So he is either telling us about a spiritual event, or a future event.

The passage goes on to speak about an everlasting righteousness. I could argue that everlasting righteousness came through the cross, that was spelled out by the writer of Hebrews, therefore I, and you, have been made righteous by the blood of the sacrifice of Christ. Again, this tends to be more spiritual, and does guarantee you a life with the Father; that comes through your acceptance, but it does impact how God looks at us. We will not be judged for sin, by Him, but we will be judged based upon what we did with His Son.

Ask yourselves, if an everlasting righteousness came through the cross, then why is it not automatic?

How God looks at us is much like the artist that decides the work is done, however there is that idea that no one comes to the Father but through the Son. So here we have a forgiveness of our inherent sin that exude constantly to the surface, and yet still must accept the Son, Jesus, as the door into the kingdom. Strangely, I see this pattern throughout the time of judgment upon the earth. Salvation is still available by acknowledging the Son and not some other, even if shoved down your throat at the edge of a sword.

Perhaps I over simplify when I say things like: the earth is one big adoption agency and we are all in it, but the concept works for me.

At some point God, in the form of the Son, comes to earth, pays the fee to adopt us all, signs the paperwork, and then tells everyone to hop in truck. (The cool thing is that here in America, we used to be able to just hop in the bed of the truck.) Some come readily while others hesitate. The guy playing video games with the spiked, multi-colored hair finally decides to jump in the truck, but bellows out – I don’t take out trash. God accepts him anyway, just as He accepted all of us with our quirks. Eventually we all come into line and do our part. Initially, all I have to do is accept Jesus into my life.